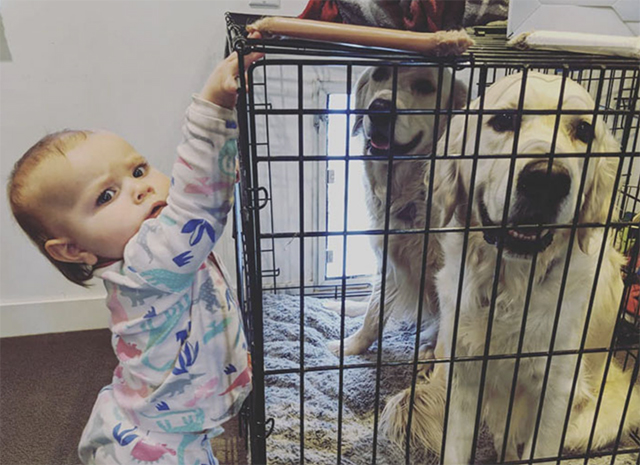 Caught on tape: Parents finally figure out how the dogs get into snacks!

The famous “Cheese Patrol” are Golden Retriever brothers named Bleu and Colby. They were thrown into the limelight after over 13 million view showed them running as puppies for their dinner. Now, again, they can be seen (video link below) carrying out a jailbreak in order to get their partner-in-crime (15-month-old Chloe) to wrangle a few early morning snacks for them.

Chloe and her dogs are the best of buddies. Apparently, she is more liberal with snacks than her dad and mom, which gives her great appeal. Dad Chris is quoted as saying, “Colby parks himself under Chloe’s high chair every night. Lately she’s gotten tall enough to reach into their food bin, so she scoops out kibble and drops it for them, much to our chagrin.”

Breakfast time usually brought rounds of barking outside mom and dad’s door, but when this was unfruitful, the dogs started recruiting Chloe to do their bidding. Softly, they swung opened Chloe’s door and woke her up with licks and nudges. The puppies lead her gently in the direction of the snacks and she is only too happy to cooperate!

Chloe’s mom was puzzled to find her walking the halls in the early morning hours, since she wasn’t big enough to open her own bedroom door yet. So she installed a security camera to find out what was going on. The jailbreak is really heartwarming, both for the intelligence and the teamwork.

Sadly, the morning mischief has come to an end. Security is cracking down, so for now, the brothers are back on their diet. Click below to see the adorable footage.